With the media’s recent attention on the sexual assaults at the University of Western Ontario, you may fully support the survivors and the calls for reform on campus but still have many questions. You may have begun to realize that some of your friends have likely experienced sexual assault. You might find the news hard to hear because you are a survivor of sexual assault. Maybe you are not sure if you were sexually assaulted, or if you sexually assaulted someone.

You might also wonder why survivors of sexual assault do not report to the police.

This article can help answer common questions about sexual assault that you may be too afraid to ask: 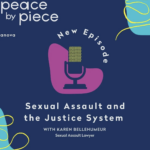 You can also listen to Karen Bellehumeur discuss sexual assault and the criminal justice system.

Listen to Peace by Piece with Karen Bellehumeur on Spotify

If you were intoxicated and lost consciousness prior to being touched sexually, you did not consent. If you were so intoxicated that it was obvious to anyone that you did not have the capacity to consent, then that was not valid consent. However, the courts have been inconsistent in determining how intoxicated one has to be before one is incapable of providing valid consent. Until the courts have provided more clear guidance on this issue, your case will be assessed on the facts, and you should not be deterred from seeking help on the basis of having experienced a sexual assault.

If the perpetrator was intoxicated, the perpetrator cannot rely on this fact as a defence. The Criminal Code specifically prohibits a defence of ‘honest but mistaken belief’ that you consented if that belief comes from self-induced intoxication. If the perpetrator was so intoxicated that he was in a state of ‘automatism’ then this may be a defence. However, it is incredibly unusual for someone to reach the extreme level of intoxication to qualify for a defence involving automatism. Typical partying and partying involving binge drinking will not be a defence to someone who is charged with sexual assault.

Sexual assault, no matter how minor, can be incredibly traumatizing. Addressing and processing this trauma through the help of a mental health professional is highly recommended. You may also want to confide in a person you trust, like a friend or family member. Despite pressures to report, you do not have an obligation to disclose the sexual assault. You should choose to heal from this traumatic event in whichever way is best for you.

If you are in danger, or you require immediate medical attention, call 911. You may be asked to consider having a Sexual Assault Evidence Kit (SAEK) done at the hospital. A SAEK is voluntary and your consent is required. You do not necessarily have to report the sexual assault if you choose to have the SAEK done. You can refuse to have a SAEK done and still report the sexual assault.

If you were sexually assaulted, understand it was not your fault. It is important to try to resist believing in common sexual assault myths or engaging in a ‘victim-blaming’ mindset. Buying into this rhetoric can lead to feelings of shame, embarrassment and have serious consequences on a survivor’s mental health. By understanding that this rhetoric is based on myths and stereotypes, you can take the essential step in your healing process: practicing self-compassion.

It is recommended that you speak with a lawyer specialized in sexual assault, particularly one who is trauma-informed and familiar with working with survivors so that you fully understand your legal options. For more information on accessing free legal advice, click here. To learn how a trauma-informed lawyer specialized in sexual assault can help you before and during the criminal justice process, click here.

Yes! If you are a survivor of sexual assault, you can receive up to four hours of free legal advice through the Independent Legal Advice (ILA) program. ILA is available to survivors who are at least 16 years old and who live in Ontario. You can receive ILA before disclosing it to the police. You do not have to disclose your sexual assault to the police if you obtain free legal advice through ILA.

It is your choice. Sexual assault is a crime that you may want to report to the police. This is your personal decision. The criminal justice process is not always conducive to a survivor’s healing and can result in survivors experiencing further psychological harm. You are not obligated to report a sexual assault to the police, despite any pressure you are feeling to do so. It is most important that you get informed on your options and choose what is best for your healing. We recommend you seek legal advice before reporting a sexual assault to the police.

There are multiple avenues for seeking legal recourse for a sexual assault. A lawyer can help explain this in greater detail so you understand your rights and the options available to you.

See how a trauma-informed lawyer can help you

People often unknowingly embrace the myth of ‘the perfect victim.’ It is important that everyone understands the ‘perfect victim’ myth and acknowledge that these are unfair and unrealistic expectations placed on survivors of sexual violence. These myths do not account for how trauma affects survivors, and they are based on misconceptions, false beliefs, and stereotypes.
The perfect victim myth assumes that if you were really sexually assaulted, you would:

View the government of Ontario’s chart dispelling these myths

If you are a survivor of sexual assault, know that you are not alone. It is most important that you choose a healing process that is best for you.

For information on what happens after you disclose a sexual assault to the police, click here.